On a recent trip to the WWI battlefields an Old Forester happened to look down and spot two commemorative plaques for OFs Charles Stanley Pearce and Ernest Frederick Morse who were one of the first few men to have died on the first day of the battle of the Somme.

98 Forest pupils died during WWI which In a school of only 125 in 1919, 98 lost was significant.
To mark such a loss, the school and the Old Foresters club funded and installed commemorative plaques in St George’s chapel in Ypres. The donations help fund maintenance of the site as a memorial.

Today at Forest School we continue to remember those 98 OFs.
There has been a long term display in the OF’s club display cabinet in the Deaton Theatre foyer and as ever staff and pupils have continued to pay their respects on Remembrance Sunday in the Chapel and Quad. 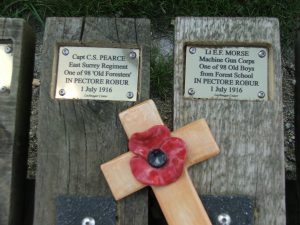