A London school like no other, our pupils experience a taste of two very different worlds: a busy city school set within 50 acres of grounds, surrounded by Epping Forest.

Forest is well connected to central London with fantastic transport links close to the school.  We are a 10-minute walk from Snaresbook tube station which is just 15 minutes away from Bethnal Green and 28 minutes away from Oxford Circus on the Central Line. We are also a short bus journey away from Walthamstow Central, which is served by the Victoria line and London Overground.

Some interesting facts about the School grounds

The School owns a further 25 acres of sports grounds, known as the Park, which is easily accessed through the forest, and can be seen in the image below. Pupils have use of football and cricket pitches, athletics tracks and an all-weather Astro Turf facility in the Park. 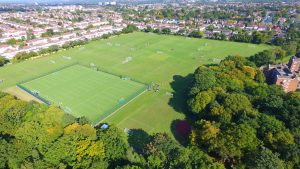 About
where next? explore Forest
Chapel
School History