Old Forester Eshaan Akbar was funny even when he was at school, and it has been no surprise to Forest that he is finding success as a comedian.

A stalwart of School House (for those of you who might be a little confused, School House was originally a Boys’ House and was moved over to balance out the Girls’ Houses just a few years ago), Eshaan left Forest in 2002 with every intention of following a more conservative career path. However, by 2014 Eshaan had started entering (and being very successful at it, too) stand-up comedy competitions. Today, doing something that he loves, Eshaan has supported Micky Flanagan and is regularly seen on The Big Asian Stand-Up, Frankie Boyle’s New World Order, Mock the Week, and QI.

He still keeps in touch with the School, and recently chatted to our 6th Form alumni team who interviewed him for the next edition of the OF News. Needless to say it was a very entertaining interview. Eshaan was on Mock the Week again last night, so for those of you who’d like to see him in full comedy flow, check him out on BBC2 iPlayer. https://www.bbc.co.uk/iplayer/episode/m000nx56/mock-the-week-series-19-episode-2 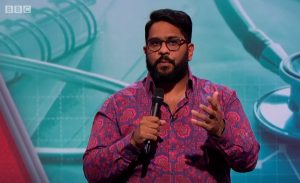 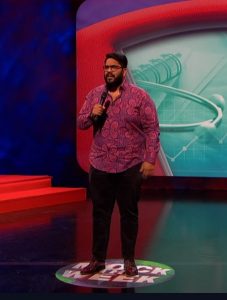