Chris and the other triathletes took on the 12-for-12 challenge representing the number of hours in a standard NHS shift and cycled as far as they could on indoor turbo trainers.

Family and friends joined the club’s zoom call throughout the day to show their support.

As a triathlete Chris competes at a Regional level and is part of the London Regional Academy. Last year he ranked 9th in London in his first ever season as a triathlete. We hope this charity cycle helped him with his training! Well done Chris and London Fields Tri Club. 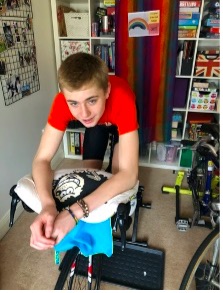