Forest School pupils have once again posted impressive GCSE results in new challenging examinations where grades are awarded under the new number grading system. As you probably know, the old alphabetical grades now have numerical equivalents where a 9 is an A**, an 8 is an A*, and 7 is an A.

It is also pleasing to note that there was no gender gap with boys performing 2% higher than girls overall, bucking the national trend which sees girls outperforming boys.

All of Forest’s Year 11 pupils were also entered for the Higher Project Qualification (HPQ) a high-level research project favoured by universities, and an impressive 92% of pupils attained A*-B grades in their HPQ with 78% achieving A*/A.

‘Splendid individual achievements, backed up by collective successes, mean there is a lot to be proud of at Forest today. Since September, I’ve been so impressed with this cohort’s mature approach to Year 11. They are characterised by their collective determination and good humour, as well as their caring nature. The pupils

have really supported each other through the series of academic challenges that have been placed in front of them. The GCSE process is tough, even gruelling at times, so these results are hard-won and truly deserved. I must thank the staff at Forest who have worked tirelessly to support the Year 11 pupils, both academically and pastorally, and to their families who have also been there every step of the way. Next term will be the start of a new chapter for these young people. I wish them all the best as they immerse themselves in their 16+ studies, whatever they have chosen to do.’

‘Another year of excellent, well-deserved GCSE results for a cohort who have found success on many different fronts at Forest. Their academic prospects for the future look very good.’

‘I am so thrilled to have done even better than I thought I would. I’ve secured my place in the Sixth Form and proved to myself that I can define myself in terms of academic success as much as anything else. All good!’

ABOUT THE NEW 9-1 GRADES 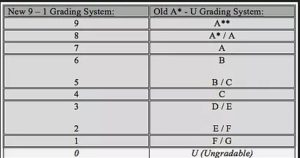