Forest School is extremely delighted to report that Ziana Butt in Year 12 has been shortlisted as a finalist in The Asian Women of Achievement Awards 2020.

The AWA Awards was founded in 1999 to celebrate multi-cultural Britain and the contribution of diverse cultures and talents to UK society. The awards recognise Asian women who are making a valuable and important contribution to British life.
Ziana has been shortlisted as a finalist in the Sports Category. As an elite athlete Ziana has made significant contributions to the sport of netball and represented England ​in the England Nets U21 ​squad in the World Indoor Championships last summer in South Africa. And Ziana continues to play at Superleague ​Franchise level for Saracens Maverick​s U19 squad.
The awards also recognise and celebrate Ziana’s contribution to sport and the wider community through her extensive volunteering and mentoring activities. Ziana has become a role model for younger girls in terms of sharing her insights and challenges that she’s faced in her netball career.
‘By being a finalist of AWA I ​have a platform where I can ​continue to share my story and talk about ​barriers I have faced, what’s important to me and hopefully help and inspire others’
The spotlight of the AWA wards has led to the Head of Pakistan Netball Federation reaching out to Ziana ​as he is looking for a role model for young Asian Pakistani women.
The AWA Awards Final is to be held in September at the Hilton Park Hotel in London. The School wishes Ziana luck for then; but for now congratulations Ziana on this fantastic achievement. 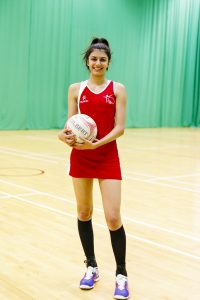